Let’s Talk… about the words we use – this week: the “C” word

Let’s Talk… about the words we use – this week: the “C” word

This is the first of a series of four weekly posts about the words we use, culminating on January 30 – Bell’s Let’s Talk Day. You can join the conversation by posting a comment below. Your identity will be kept confidential.

We hear it all the time. We probably use it – or more precisely, misuse it – without even realizing. It’s so commonplace that we’ve forgotten its actual definition and the connotations attached to it.

It’s usually used without any ill intent. It’s just crept into our daily way of speaking. We say, without thinking, “Things were so crazy at the office today” or “I was crazy busy” or “He drives me crazy.” These are generally not meant to cause offense to anyone, but if we look at the actual meaning of the word, we may just want to choose something less offensive and even more descriptive.

The word “crazy” is actually defined as an offensive term meaning affected by a psychiatric disorder. This meaning is even more evident in its derivative “crazed” – frequently paired with an even more offensive word: “crazed lunatic.” Like its arguably less-offensive cousin, “insane,” it’s become commonplace to use for emphasis when describing an extreme situation. But is it even the best choice to describe what we mean?

Try to imagine what other words could be substituted. Perhaps hectic, strange, wrong, or aggravated might actually be more descriptive. Now try applying these words to a person affected by a psychiatric disorder, and we can readily see how stigma takes hold.

While thinking of synonyms, you may have came up with words like “nuts,” or “loony.” If so, you may be starting to see how much we’ve allowed these derogatory words to be normalized in our everyday conversation.

The next step is to ask how we’ve let this happen, and why we let it continue. Words deemed offensive to racial and sexual minorities are not tolerated in everyday public discourse. Yet so many of us, including public figures of all stripes, use such terms to describe things they don’t want or to denigrate an opponent. Why do we permit such widespread acceptance of these epithets?

In a word, it’s discrimination. 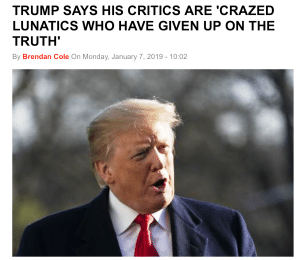 By accepting the use of these words, our society is saying that discrimination against those living with mental illness is acceptable.

If we want to end discrimination, we can’t continue letting this go unchallenged. This is not meant to judge anyone who uses the term innocently – we all do it to some extent. But if we become a little more conscious of the words we use, we might become more accurate and less stigmatizing in our language.

And we can also encourage others to do the same.