It’s OK not to be OK

It’s OK not to be OK

Just over six years ago, I was diagnosed with a chronic illness. Not all that common, but not all that rare, this illness will strike up to 6% of the population at some point in their lifetime. Or roughly 2.2 million Canadians.

At best, my life expectancy has been shortened by 7 to 11 years. An illness that is also a risk factor for cardiovascular diseases, among other medical conditions.

It’s a hereditary illness. I didn’t ask for it. I didn’t choose it. It was not within my power to prevent it.

There is no cure. Nor, to my knowledge, is there any significant research being done in Canada (or in the world) to find a cure for this illness. And yet, those of us afflicted are told to cling to hope. That tomorrow will somehow miraculously be better. That we’ll be OK.

It’s not an illness easily broken down into stages. But let’s assume 4 stages, where Stage 1 is initial onset and Stage 4 requires specialized care, if not hospitalization. An illness so insidious, it goes undetected in Stage 1, when it generally develops in childhood.

The teenage years are when Stage 2 hits. And while the symptoms at this stage are detectable, the diagnosis usually remains elusive, all too often resulting in misdiagnosis. Stage 3, if you’re lucky, gets you the diagnosis needed to begin treatment. Now, about treatment…

Sure, there are treatment options to help manage the symptoms. Treatment with mixed results. Treatment not generally covered under our public healthcare system. First-line treatment, we rely on GPs (covered) and medication (not covered). But specialized care is needed. 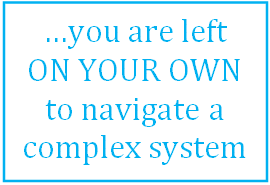 In Stages 1-3, you are deemed, by societal if not medical standards, too “healthy” to warrant accessing publicly-funded specialized care. Unless and until you reach Stage 4, you are left ON YOUR OWN to navigate a complex system to find (and pay for) the right specialist care.

Stage 4. NOW it’s taken seriously, because you no longer function *normally*. You don’t eat (or overeat). You don’t sleep (or oversleep). Backaches. Stomachaches. Headaches. Incessant fatigue. Constant pain. Meds no longer work. Treatment is now beyond what GP can provide.

So you’re *finally* referred to a publicly-funded specialist. Or, more accurately, referred onto a waiting list. A waiting list of 12-18 months. Unless, of course, you reach a point of despair that you are deemed a threat to yourself. Then, and only then, are you hospitalized.

What if I told you it was a form of cancer. Would you be up in arms about how 2.2M Canadians are being (not) treated? Start a ribbon campaign? Organize a race? Host a gala? Launch a GoFundMe? Write your MPP? Lodge a human rights complaint? Well, guess what? It is a cancer… of sorts. It’s a cancer of the mind. It’s a cancer of the soul. It’s called Persistent Depressive Disorder. A life-long condition one can’t simply snap out of. It is just 1 of 297 medically-recognized mental illnesses for which social stigma & systemic discrimination exist.

So the next time you ask me if I’m OK, know that, regardless of what I might respond, I am not OK. I’m far from OK.

I’m not OK living with an illness where I’m more likely to receive public judgment than publicly-funded treatment.

I’m not OK with the fact that 1 in 2 Canadians will have, or have had, a mental illness by age 40, and yet mental health accounts for only about 8% of total public health investments in this country.

I’m not OK with mental healthcare being primarily “user pay,” in a country that prides itself on its publicly-funded healthcare system. A system that is supposedly *universal* and not two-tiered.

I’m not OK with being systemically discriminated against based on an invisible illness stemming from my genetic makeup, and de facto being treated by our institutions and by society in general like a second-class citizen.

I’m not OK with mental health recovery being called a “journey.” Treatment for an illness shouldn’t require blindly navigating the back roads of our healthcare system, paying tolls along the way. When you’re sick, forget sightseeing. You want — need — a clear destination.

So if you are struggling with a mental illness, it’s OK to not be OK. The status quo is not OK. You and I will never be OK until the day #MentalHealthIsHealth is not just a campaign slogan, but the way things actually are… Our ultimate destination.